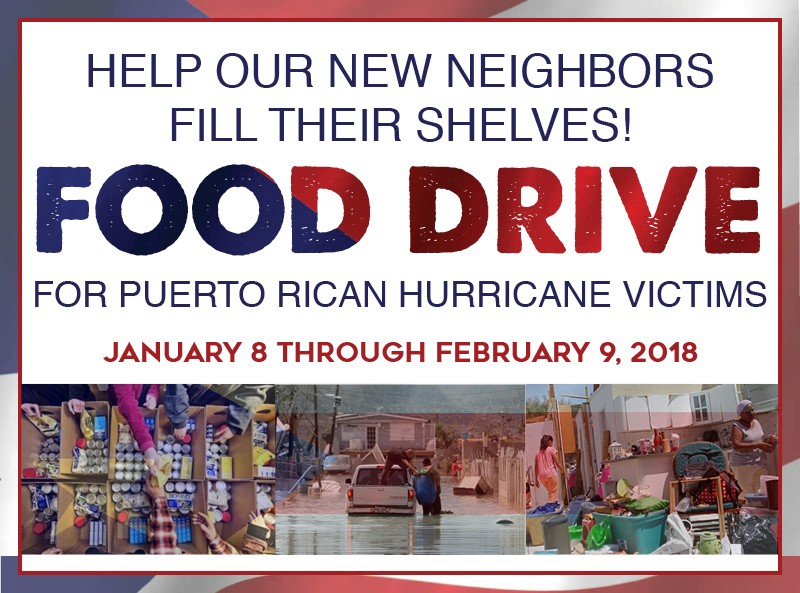 WEST HARTFORD, CONN. (January 12, 2018) – Thousands of Puerto Rican and other Caribbean individuals and families displaced by Hurricane Maria are expected to come to Greater Hartford to begin a new life. More than 1,300 have already arrived. You can help them by donating boxed and canned food items to a food drive now through February 9.

“Imagine that everything you own is wiped away and you are suddenly a stranger in a strange land,” said local attorney and multicultural community activist Jeffrey Dressler, who has played an integral role in the Jewish community’s Hurricane Maria response effort. “As Jews, we know this feeling. Now we have the opportunity to do mitzvot (good deeds) and build bridges to another beautiful community.”

Organized by the Jewish Community Relations Council (JCRC), part of Jewish Federation of Greater Hartford, the drive especially needs Grace or Goya brand products, including bags of rice, bags of beans, and cans of tomato sauce or tomato paste; spices and seasonings such as sugar, salt, adobo, sazón and garlic powder; Kellogg’s brand cereals, Cheerios, Cream of Wheat and Quaker Oats; and coffee or juice, including Bustelo, Pilon or Maxwell brand coffee and Capri Sun brand juice drink. Everyone is encouraged to participate.

The food drive is the third phase of JCRC’s response effort in collaboration with CREC and other agencies. In late October, Jewish Family Services’ Tara’s Closet and JCRC joined forces to sort and donate hundreds of winter clothing items to the Relief Center, and a toiletry drive in November collected two SUVs full of hygiene products. JCRC is also coordinating small-scale volunteer opportunities to sort donations at the Relief Center. To learn more or to get involved, contact Alana Butler, Federation’s Director of Community Engagement, at 860.727.6152 or abutler@jewishhartford.org.

“Without support from volunteers or groups like the Jewish Federation, we would not be able to provide food or clothing for the displaced families,” said Aura Alvarado, CREC's director of communications and community relations. “We are so appreciative of the support we have received from the Jewish community.”

“It's so heartwarming to see our Jewish community help when help is needed. And we’re doing it efficiently and effectively,” added Norm Sondheimer, a JCRC board member who chairs the Jewish community's response effort. “It feels good to know we are making a difference.”