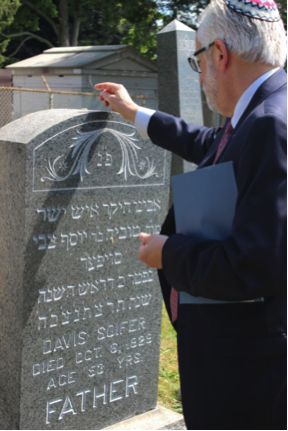 The Jewish Federation of Greater Hartford, the Association of Jewish Cemeteries, and community leaders gathered Wednesday morning, June 29, to rededicate Dreyfus Lodge Cemetery, which was vandalized over the winter and repaired through a remarkable joint effort of the Jewish, interfaith and local communities.

“Dreyfus Lodge was a Jewish fraternal organization overseen by the Independent Order B’rith Shalom - whose name means ‘Covenant of Peace,’” noted Howard Sovronsky, Federation President and CEO. “Members met twice a month in locations all over Hartford, including Central Row and Main and Pleasant Streets. The individuals whose headstones were compromised were real people with real stories and ties to this Jewish community.”

The Dreyfus Lodge Cemetery rededication was an opportunity to remember the forebears of the Greater Hartford Jewish community and to demonstrate that they have not been forgotten.

At the conclusion of the ceremony, attendees placed a small stone on each grave – an ancient Jewish custom that shows the grave has been visited. Commemorating a burial and the deceased is considered a mitzvah, or commandment, in Judaism.