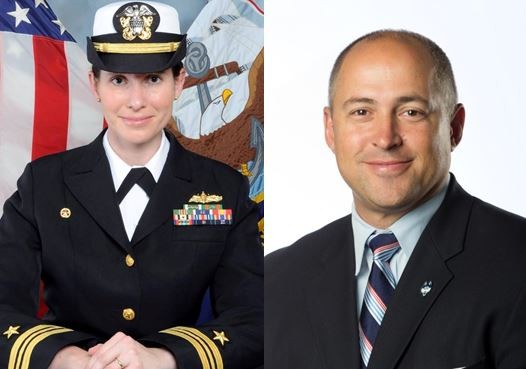 WEST HARTFORD, CONN. (August 18, 2017) – Jewish Federation of Greater Hartford’s largest annual women’s and men’s events - Voices on September 11, and Visions on October 17 – will focus on the intersection of Jewish values and leadership. Guest speakers Lieutenant Commander Alexa Forsyth Jenkins of the U.S. Navy and UConn Athletics Director David Benedict will share how their Jewish upbringings have influenced their approach to leadership, service, and teamwork under pressure.

Lessons in Leadership and Service from a U.S. Naval Commander
The first Jewish woman to command a U.S. Naval warship, LCDR Jenkins will discuss how her Jewish values of family, community, and joy have influenced and sustained her as a leader. She currently serves as the Commanding Officer for USS TORNADO (PC-14) stationed in Mayport, Florida. LCDR Jenkins graduated in 2004 from the U.S. Naval Academy and has completed five deployments. Her work has taken her to the Arabian Gulf, the South China Sea, the Gulf of Guinea, the Gulf of Aden, and the southern coast of Somalia, where she participated in carrier strike group operations, counter piracy, partnership building missions, and unmanned aerial vehicle deployments. Previously, LCDR Jenkins commanded USS CHINOOK (PC 9) based in Manama, Bahrain. She also holds an MBA from the Kenan Flaglar School of Business at UNC-Chapel Hill. She has a personal connection to Greater Hartford; her aunt is Nancy Gitlin and her cousins are Carolyn Gitlin and Stephanie Gitlin.

More than 400 women from across Greater Hartford are expected to attend Voices on Monday, September 11, 2017 at Beth El Temple in West Hartford. A cocktail reception and kosher dinner buffet begin at 5:30 p.m.; the program and dessert will follow.

Jewish Leadership Values On and Off the Field
David Benedict is a second-generation football player and coach whose collegiate athletics career has taken him all over the country. Benedict was a linebacker at Southern Utah, where he earned his undergraduate degree, and a graduate assistant football coach at New Mexico Highlands, where he earned his master’s degree. Through his leadership experiences at Auburn, Minnesota, Virginia Commonwealth, Long Beach State and Arizona State, Benedict developed a national reputation for developing well-rounded student-athletes while setting and achieving aggressive goals for team success, donor engagement and sound fiscal management. In March 2016, he joined UCONN as Director of Athletics. Benedict’s Husky pride and his passion for all things athletic are clearly displayed on his Twitter handle, @UConnHuskyAD. At Visions, he will discuss how his family’s Jewish values have influenced his approach to winning and share his thoughts on UCONN’s prospects this year.

More than 350 men from across Greater Hartford are expected to attend Visions 2018, which will be held Tuesday, October 17, 2017 at The Emanuel Synagogue in West Hartford. The evening begins with a cocktail reception and kosher buffet dinner at 5:30 p.m.; the program and dessert will follow.