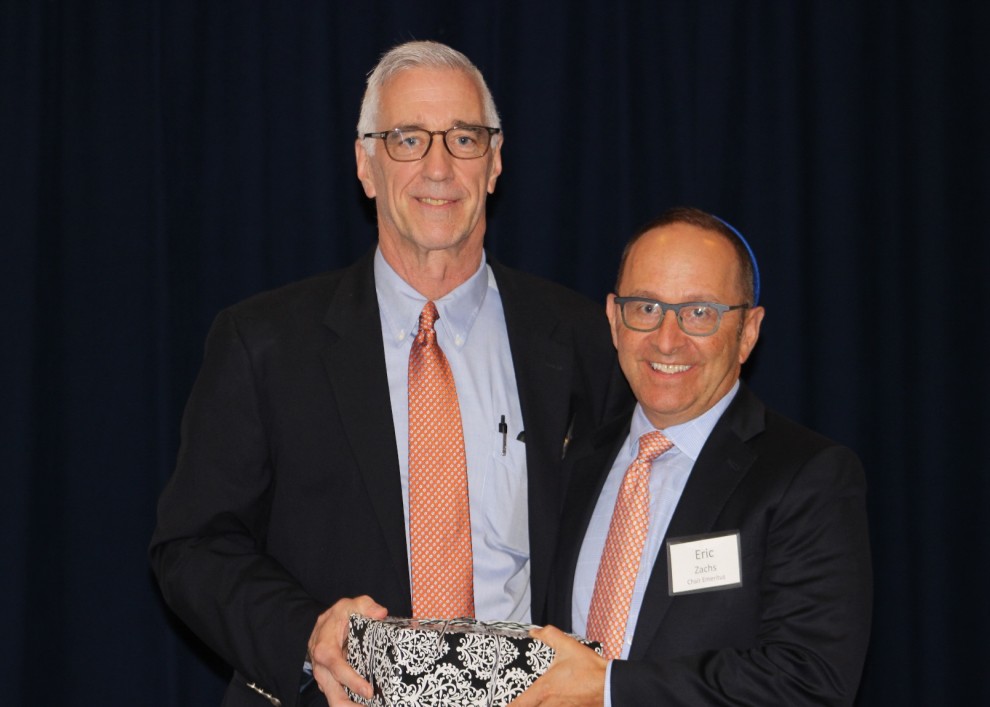 Awards and Honorees
A number of individuals and organizations received awards for their contributions to Jewish life in Greater Hartford.

Volunteer David Goldfarb and Jewish communal professional Denis Geary received the Henry M. Zachs Spirit of Judaism Award for their outstanding embodiment of Jewish values. Goldfarb is a longtime member of Young Israel of West Hartford, where he serves as prayer leader and Gabbai (a person who assists with the reading of the Torah). He also works as a patient advocate at Saint Francis Hospital and other medical centers and volunteers with the Bess and Paul Sigel Hebrew Academy in Bloomfield. Geary has been executive director of the Jewish Association for Community Living (JCL), which provides supportive housing and programs for people with intellectual disabilities, since 1993. He is beloved by many in the Jewish community for his personal attention to providing top-notch services and opportunities to JCL clients and for his work to strengthen relationships between clients and the larger community.

The Commission on Jewish Education and Leadership (CJEL) presented awards to a number of local Jewish educators for creative programming and teaching excellence.  CJEL’s Innovative Program and Innovative Family Program Awards went to Anita Levy and Rabbi Ilana Garber of Beth El Temple and to Barbara Fink and the religious school faculty of The Emanuel Synagogue, both in West Hartford. Several teens also received Uniquely Effective Madrichim Awards for their work assisting in a religious school classroom. They include Jared Beatman of The Emanuel Synagogue in West Hartford; Brynnen Bernstein of  Congregation Beth Israel in West Hartford; Mykayla Fluster of Farmington Valley Jewish Congregation – Emek Shalom in Simsbury; Benjamin Lawrence of Congregation Kol Haverim in Glastonbury; Jordan Oberstein of Beth El Temple in West Hartford; and Lyla White of Temple Sinai in Newington.

Jewish Federation of Greater Hartford has been supporting and transforming the Jewish community since 1945. From educating children to caring for seniors, Federation touches every aspect of Jewish life here, in Israel and in 70 communities around the world.