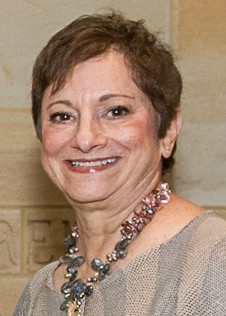 Our Women of Impact profiles feature local women, nominated by local community members, who are making an impact in our community. For this month's profile, Meredith Chandler spoke with Laurie Mandell, Federation's 2018 and 2019 Annual Campaign Chair. Laurie was nominated by Federation's Board Chair, Cary Lakenbach, for her amazing work on the 2018 Annual Campaign - which exceeded goal by more than $30,000!

I grew up in the North End of Hartford and moved to West Hartford with my family when I was 12 years old. I lived elsewhere for a number of years as an adult, but I returned to West Hartford in 2008. I wanted to be closer to my daughter and son-in-law, who had recently moved to the area and had their first child, and to my father, who was ill. (My mother had passed away a few years earlier.)

My career has been in corporate staffing, and I was the Managing Director of a staffing agency in Milford, CT, for more than 13 years after having worked at Aetna as a recruiter and legal administrator in Hartford. In 2008 I accepted a new position in Greater Hartford to be closer to my new home – only to be laid off in February 2009 during the economic downturn. I had gone to high school with David Rosenthal, and his wife, Judy – another Woman of Impact – was working with Jewish Family Services at the time to start JETS (Jewish Employment Transition Services). I decided I wanted to help, and soon I was assisting JETS clients with resume writing, interviewing techniques, and networking. I served on the board of the Staffing Managers Association for many years, so I had a lot of expertise to share in terms of motivational speakers for the group sessions. It felt great to use what I had learned to help others.

I was already volunteering with JETS at Jewish Family Services when I attended my first VOICES women’s event with Federation. Before long I was serving on various Federation committees, and then I was asked to chair the Kitchen Tours event! Eventually, I was so involved that I became a Community Trustee and was asked to serve as Women’s Philanthropy Chair for the 2014 and 2015 campaigns.  I went on to chair the Major Gifts Committee, and in 2018 I became Annual Campaign Chair.

My volunteer work with Federation is not just a way for me to give back; I have benefited from it too. I’ve been able to use many skills from my professional life while continuing to develop my talents as a leader. And I’ve had some amazing experiences. I’ll never forget the National Jewish Federation Mission to Minsk in Belarus and Israel in the summer of 2014 with Federation leaders from all over the United States. One moment in particular stays with me: as part of a Federation program, we bought and personally delivered groceries to a woman in Minsk who had Parkinson’s disease. There we were, halfway across the world, and we were able to help her feel less alone. It’s so inspiring to see what we can do when we work together.

What is your proudest accomplishment and what is your biggest challenge?

My proudest accomplishment is my family – both my children and my grandchildren. I was a single mom for many years and I’m so proud that my children have turned out to be such wonderful adults.

From a volunteer standpoint, I’m most proud of my efforts to engage young people in the work of the Federation – for example, through the creation of the Pearl Society.

My greatest setback was being laid off during the recession. My son was in college at the time and it was a very stressful situation. But it also opened new doors for me: I ended up in the recruiting business and I got more involved with volunteering.

Judaism has always been an important part of my life. I love the traditions, holidays, family get-togethers, values and charitable focus.

I celebrated my Bat Mitzvah at the original Emanuel Synagogue in Hartford and I was also confirmed there. In high school I was the President of the BBG (now BBYO) youth organization; Judy Zachs was my advisor and has always been my mentor. Today I’m a member of Beth El Temple. I love being part of this community.

First of all, never give up! I was a stay-at-home mom when I got divorced and suddenly needed to find a job.  It was daunting, but I did it! Second, keep trying. Don’t let negative feedback get you down. Giving back to the community is much more important than a few naysayers. Last but not least, always look for the good, not the bad. A positive outlook is contagious!

To nominate a Jewish woman from Greater Hartford to be featured in a Women of Impact profile, contact Meredith Chandler, Associate Vice President, Development and Director, Women's Philanthropy at mchandler@jewishhartford.org or 860.727.6125.