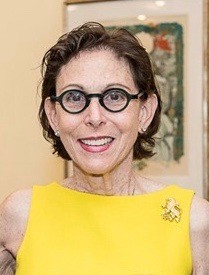 Our Woman of Impact profile features a local woman, nominated by a community member, who is making an impact in our community. For this issue, we spoke with Anne Martha Pitegoff, a dedicated volunteer and supporter of Federation for more than a decade who has led our organization in planning, allocations, and budget development— most recently serving  as Treasurer of the Board. In addition to the many hats she has worn for Federation, Anne Martha has also offered her expertise in support of JTConnect and Solomon Schechter Day School. Professionally, Anne Martha is a CPA with an MBA; she resides in West Hartford with her husband, John, where they raised their two children. Anne Martha was nominated by Judy Schlossberg, our 2021 Women's Philanthropy Chair.

Growing up in Providence, Rhode Island, my mother was very involved in the Jewish community and I feel she set the example for me quite early on. In fact, I have a clear visual memory of sitting with her during the Miriam Hospital Women's Auxiliary meetings, modeling her by pretending I was taking notes at the tender age of five! Eventually, she became the first woman president of Temple Beth El, the largest synagogue in Rhode Island. My mother served a critical role in inspiring my philanthropic journey.

I've always felt that if I'm not part of the solution, I'm part of the problem — and that drove me to find my own niche and be positively involved. Over the years, I've been able to serve in a number of Jewish organizations, including Federation, where I've served mostly on the financial side. As Treasurer, it was always very important to me that I present financials with clarity and accuracy. When you serve in an advisory position, it's absolutely critical that you report to the Board in a way that allows everyone to see the story behind the numbers so they can then fulfill their related fiduciary responsibilities.

What was your biggest challenge?

I moved to West Hartford with my husband in 1990, and in those early years, finding my own space in the community was a challenge. It took some time before I found roles in which I was comfortable and felt I could make an impact — but I'm persistent. When my son attended Solomon Schechter Day School, I spoke to several parents there, and they helped me figure out how I could best contribute. Initially, that led to serving on the Schechter board. From there, I found spaces where I could help at JTConnect, where I eventually became co-president, and thereafter began my involvement with Federation.

What is your proudest accomplishment?

I served as Treasurer on the Federation Board, but as my tenure wound down, I turned to the programming side of things. In that capacity, I recently chaired a three-part series on antisemitism, which was developed as a truly collaborative effort between Federation, ADL, and the Simon Wiesenthal Center. Whether you're Jewish or not, hate remains an issue in our country — and that series was so critical, particularly the third segment which focused on building bridges with other communities and challenging hate through alliances.  My hope is that the series is just the beginning of our collaborative efforts with other organizations and communities.

My main path to Judaism has been through philanthropic and volunteer work. We’re members of The Emanuel Synagogue locally and still belong to the Rhode Island synagogue where I grew up, but I've found that being Jewish doesn’t necessarily mean going to synagogue every day. It does mean living Jewishly and adhering to the core principles of Judaism. I also believe we all have to find our own path to Judaism. For example, our son connects to Judaism through culture, and our daughter connects in a more traditional way — but for me, the connection has always been about building community, including through Federation.

Is there any advice you'd like to share with other women?
If you have children, get involved through their school; that's a pretty straightforward path to meaningful involvement. There are also so many ways you can get involved in organizations like Federation, but you have to discover them. Speak with the professional staff to discuss your background and how you can help; they can be great partners in helping you find your path. But however you choose to get involved, make sure it's in a way that involves your passions — that way you're certain to tap into your inherent sense of worthiness.