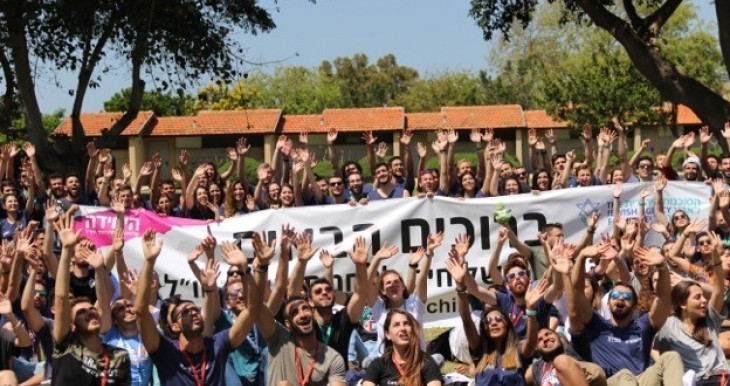 Friends, this is an exciting time of year: A new cohort of Israeli Young Emissaries has arrived in Connecticut and is about to begin a year of service in our Jewish communities! In preparation for their arrival in Greater Hartford, I've asked Nathan Shachter, a senior at UCONN and former Federation intern, to share his experience helping to prepare the Young Emissaries this spring and summer in Israel. Shabbat Shalom. - Howard

This month, 170 new ShinShinim (Israeli Young Emissaries) will be starting their year of service in Jewish communities worldwide as part of the Jewish Agency's flagship Shlichut (emissary) program. These young adults were selected out of over 2,000 candidates to spend a year between high school and their service in the Israeli Defense Forces building a "living bridge" between Israel and over 35 Jewish communities around the world. In our community, they will join classes in our Jewish Day Schools and synagogue schools, lead programs at community events, and become part of our Greater Hartford family.

The first Young Emissary sent by the Jewish Agency arrived in Connecticut 20 years ago, and Greater Hartford became one of the first communities to participate in the program a few years later. Our participation was made possible through Partnership2Gether, a joint project of the Jewish Agency and Jewish Federations of North America to strengthen ties between Israel and North America. Along with 10 other communities in Connecticut and Massachusetts, we are part of the Southern New England Consortium, which is paired with the sister region of Afula/Gilboa. Many of our Young Emissaries have come from this region, and our contributions to Federation's Annual Campaign support both the Young Emissary program and several programs that help people in need in the Afula/Gilboa region.

Recently I was privileged to spend my second year working on the Jewish Agency's Shlichut Training Seminar. After an intensive application, screening, and placement process that began over a year ago, I joined the Young Emissaries at their first seminar in March and worked throughout the summer as a Logistics Coordinator. In this capacity, I reminded the participants what it truly means to be an emissary: building relationships, being involved, putting yourself out in the community - in other words, being the face of Israel in your own individual way. Throughout the spring and summer, the Young Emissaries were provided with the tools, methods, and knowledge required for a successful placement, culminating in a week in Jerusalem filled with tours, workshops and lectures, peer learning and meetings with former Young Emissaries.

I had the opportunity to speak one-on-one with many of the members of the new delegation - in particular Greater Hartford's new Young Emissaries, Nir Sultan and Amit Akerman. I was privileged to watch ordinary Israeli teens become extraordinary representatives of Israel.

I would not be doing the work I am today if it weren't for the connection forged through past Young Emissaries. Both personally and professionally, over 50 of Connecticut's Young Emissaries have impacted my life since I was very young. My time with the future Young Emissaries and my Jewish Agency co-workers this year was one of the most important experiences I've had so far as a developing Jewish communal professional.  Most people don't have the opportunity to see what goes into becoming an emissary. I feel so fortunate to have played a small role and to have seen the significant impact that Israeli emissaries are making around the world.

I have no doubt that all the new Israeli Young Emissaries will more than succeed in their respective communities. Even more so, I am extremely excited to welcome Nir and Amit to Greater Hartford this week as they create their new "home" here in Greater Hartford, just as I have now done in Israel.