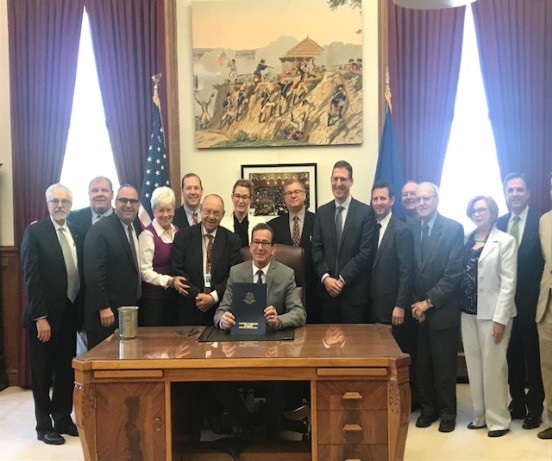 After more than 10 years of tireless work by a broad coalition of organizations, faith groups, educators and elected officials, a unanimous vote of our State Legislature enacted SB 452: An Act Concerning the Inclusion of Holocaust and Genocide Education and Awareness in the Social Studies Curriculum.

On Thursday morning, I had the honor and privilege to represent our Jewish community at the official bill signing by Governor Malloy. It was an historic event as Connecticut joined approximately 10 other states that recognize the vital importance of teaching our children about the dark side of humanity and of helping them understand how history too often repeats itself.

Recent studies point to a troubling trend among young people of declining knowledge of, and interest in, the facts about the Holocaust and other instances of genocide. While it was the Holocaust that most directly affected our Jewish community, we have an obligation to ensure that similar expressions of hate are noted and stopped.

This new law begins a process of education that - with our hope and our vigilance - could finally bring an end to genocide.

Our Jewish community is part of a larger whole that deserves credit for the passage of SB 452. We worked side by side with survivors and advocates from the Rwandan genocide, members of the Armenian community, and elected officials.

Let us all pray that this small step will lead to more tolerance, greater acceptance, and compassion for all.