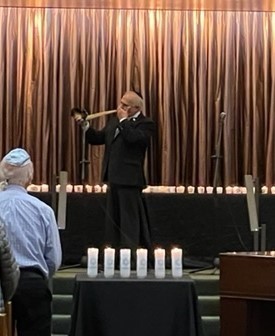 Aided by your generous contributions to Federation’s Annual Campaign, Voices of Hope continues to ensure that the lessons of the Holocaust will never be forgotten. This vital Federation partner offers a wide variety of programs to remember the Holocaust and educate adults and children across Connecticut about the evils of genocide. This spring, for the first time since 2019, Voices of Hope was able to commemorate Yom HaShoah in person. In the letter below, Director of Programs and Development Robin Landau shares a recap of the evening.

For the first time since 2019, our community was able to convene in person in commemoration of Yom HaShoah, Holocaust Memorial Day. More than 150 people gathered at The Emanuel Synagogue on April 24 for the ceremony, which was organized by the Mandell Jewish Community Center and Voices of Hope and co-chaired by Voices of Hope board members Jeff Israel and Sharone Kornman.

The program was also accessible via livestream, allowing an additional 130+ viewers to attend virtually from the comfort of their homes. Community rabbis, Holocaust survivors, and their descendants participated in a procession of yahrzeit candles in memory of loved ones who perished in the Shoah. In honor of the six million murdered Jews, Holocaust survivors Leon Chameides, Ruth “Tutti” Fishman, Jerry Gulbas, Nina Gulbas, Nina Jacobs, and Bob Lesser each lit a memorial candle.

Beautiful music filled the sanctuary as – for the first time – Cantors Stephanie Kupfer of Congregation Beth Israel, Sabrina Lipton of Temple Sinai, Joseph Ness of Beth El Temple, and Daniella Risman of The Emanuel Synagogue sang in unison. “While I know that each of you singing solo is such a gift,” remarked Mandell JCC Executive Director David Jacobs, “coming together took the entire experience to a higher level.” The Kingswood Oxford School’s Voce Women’s Ensemble shared a musical adaptation of Pavel Friedman’s poem “The Butterfly,” which he wrote in Theresienstadt before being murdered at Auschwitz. This selection was especially meaningful to our community given our participation in the international Butterfly Project, which remembers the 1.5 million children who perished in the Shoah.

The program featured a number of moving speakers, including Ruth “Tutti” Fishman, who spoke about her experiences as a child survivor with her children, Heidi and Peter, and her grandson, Garrett. This intergenerational conversation highlighted the role that descendants of survivors play in Holocaust memory. Dr. Leon Chameides, who was hidden in a Ukrainian monastery during the Shoah, spoke about Ukraine’s place in Jewish life and history in recognition of the war raging there once again.

All in attendance were greatly moved by this very special evening – one that felt even more so after the pandemic forced us apart for so long. At long last, we were finally able to share in each other’s physical presence again.

To learn more about Voices of Hope or to watch a full video of the program, click here.

Above: Event co-chair and Voices of Hope board member Jeff Israel concludes the program by blowing a shofar that his family smuggled out of Germany.

Image courtesy of Voices of Hope