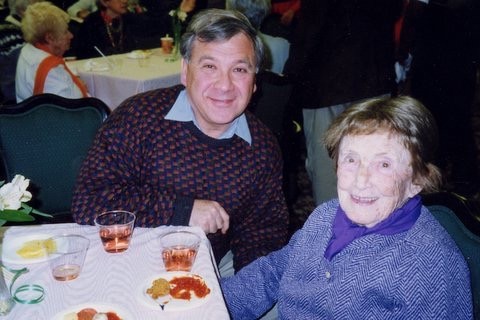 Friends, this week the Chair of our Federation, Cary Lakenbach, shares a bit of his own Jewish story with you. Happy New Year and Shabbat Shalom. - Howard
I have the utmost admiration for Howard. His Friday messages are inspirational and beautifully cap a week. They also set a bar that is somewhat daunting!
When people hear I am the Chair of the Federation, they sometimes say, "oh, you're a big macher." The word conjures up images of a Jewish J.P. Morgan, spinning the wheels of the community. It isn't nice, and it isn't accurate. So today I'd like to share a little bit of my personal story with you.
I was born in Rome after the war. My father was 54 and my mother 43 when I was born. They had survived the war in Italy after escaping from Nazi-held Zagreb (now part of Croatia). We came to the U.S. when I was 3 years old. My folks had no transferable skills, but my father managed to find a relatively menial job with Longines Watch Company and my mother helped to process claims against Germany for the United Restitution Organization (URO). Both jobs were low paying.
We lived in a modest brownstone on the West Side of Manhattan. In those days, it paled in comparison with my wealthier friends' apartments on West End Avenue and Central Park West. My parents worked hard to make ends meet. I had relatively few toys and didn't own a bicycle, and it wasn't until well into my teenage years that I summoned the courage to invite people to our home. In many ways, the experience and contrast were painful, but of course it was no one's fault, except for the evils of history.
What I did have, however, was much more important: a loving family and good friends. My dad often walked me to school, and I'd count the house numbers as we walked - even numbers in one direction and odd numbers in the other. Probably explains my love for numbers and my becoming an actuary.
My Aunt Grete had come to this country before the war and had the means to send me to camp each summer. My camp was called Children's Colony and while it wasn't a Jewish camp per se, it catered to Jewish families who had emigrated from Europe. I formed lasting friendships there including my good friend Richard Sheldon, whom I have known since we were four years old!
Although I didn't own a bicycle, one summer Children's Colony provided a limited supply of bikes and I was determined to teach myself how to ride. I practiced and practiced until I was able to ride all the way from Bantam to Lakeville - a 25 mile ride. My Aunt Grete was so proud!
Back then we weren't able to give much money to causes, but we did have a Tzedekah box which we added to each Friday before Kiddush. And my parents loved Israel! My dad, who had grown up in Vienna, was an ardent Zionist. One of my strongest memories is of the Six Day War: I know exactly where I was when I heard that the IAF had decimated the Arab air forces.
This is my story, and these are the values I try to bring to my own family and to my work with Federation. Thank you for taking time to read it. I hope to meet you and hear your story soon!
As we march into the New Year, I want to leave you with a few thoughts:
I wish you a Happy and Healthy New Year and, as always, Shabbat Shalom.
Cary
Cary Lakenbach
Chair of the Board
Jewish Federation of Greater Hartford
Photo caption: Cary Lakenbach and his Aunt Grete.