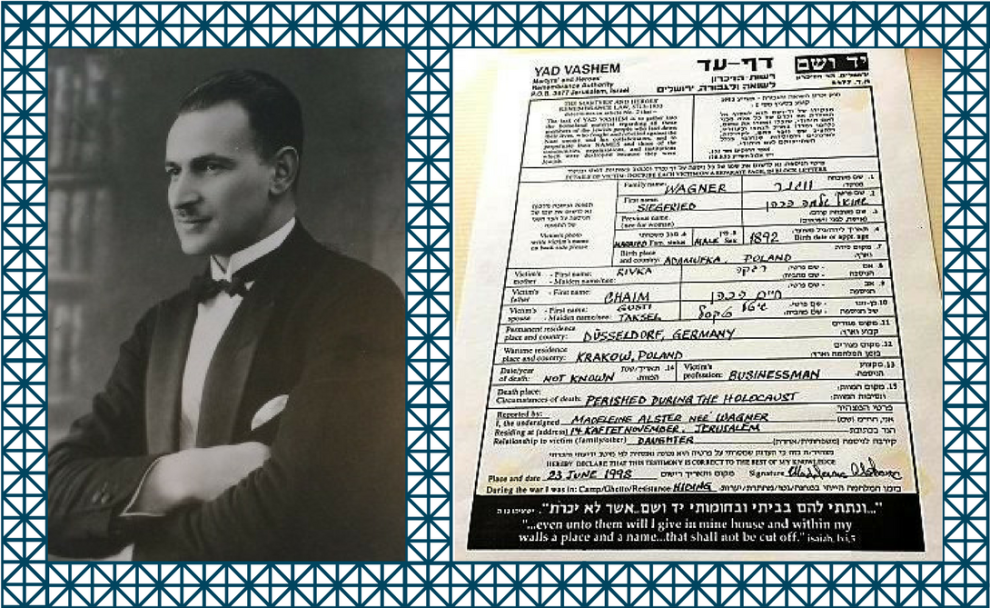 This winter, the Holocaust became personal. Not that I didn't know what happened to millions of Jews and others considered undesirable by the Nazis - but my understanding came mostly from old newsreels and photos, stories in books, and the oral accounts of relative strangers. While powerful, my connection to the Holocaust lacked a certain intimacy until I visited a cousin in Israel this past January.

Madeline was my mother's most favorite relative. She was hidden by a Polish physician for many years during the war and later discovered in a displaced persons camp. She arrived in Brooklyn at the age of 11. She grew to adulthood, married and had several children in the U.S., then followed them to Israel more than 40 years ago.

Our reunion was amazing. I had not seen Madeline in over 40 years, and during our time together I met cousins I never knew I had and learned secrets that had been hidden for over 70 years. I learned about Madeline's father, my great Uncle Siegfried (shown above). He last resided in Krakow, Poland, and lost his life along with many other members of my family. To keep their memory alive, my cousins registered each family member at Yad Vashem, Israel's Holocaust Memorial. The photo and the registration document above are the only mementos I have of Uncle Siegfried.

Monday is Yom HaShoah, the internationally recognized Holocaust Remembrance Day. It is a day of deep sadness and one that begs us to ask many questions. Could we have done more to save those who perished? Probably; but we cannot go back and change the outcome. We can, however, look forward.

Last night I sat with members of our community to discuss how to distribute funds raised through Federation's Annual Campaign to help those who are most vulnerable in Israel and throughout the world. There we sat, 75 years after the Holocaust - when so many people were helpless and so few Jewish and non-Jewish organizations stepped up to offer assistance. We gathered last night as free American Jews, doing the holy work of helping others. Through Federation's work, we will bring life and hope to struggling elderly Holocaust survivors the Former Soviet Union, to Ethiopian Jewish families and their children who are still trying to integrate into Israeli society, and to hundreds of children with special needs who require more intensive care than the government can provide. In 75 years, we have come a long way - and I, for one, am eternally grateful to be a part of this incredible effort.

Many of us light special candles in memory of those who perished in the Holocaust. Let us remember everyone who died at the hands of the Nazis, and all those who have been murdered by ruthless parties who labeled them as "other." Unfortunately, genocide is not limited to WWII.

This Shabbat, I ask that you take to heart the words of Rabbi Jonathan Sacks:

We remember and pay tribute to the survivors, who bore witness to what happened, and to the victims, so that, robbed of their lives, they would not be robbed also of their deaths.

We remember and give thanks for the righteous of the nations who saved lives, often at risk of their own, teaching us how in the darkest night we can light a candle of hope.

Today, on Yom HaShoah, we call on You, Almighty G-d, to help us hear Your voice that says in every generation:

Do not murder.
Do not stand idly by the blood of your neighbor.
Do not oppress the stranger.

We know that whilst we do not have the ability to change the past, we can change the future.

We know that whilst we cannot bring the dead back to life, we can ensure their memories live on and that their deaths were not in vain.

And so, on this Yom HaShoah, we commit ourselves to one simple act: Yizkor, Remember.

May the souls of the victims be bound in the bond of everlasting life. Amen.