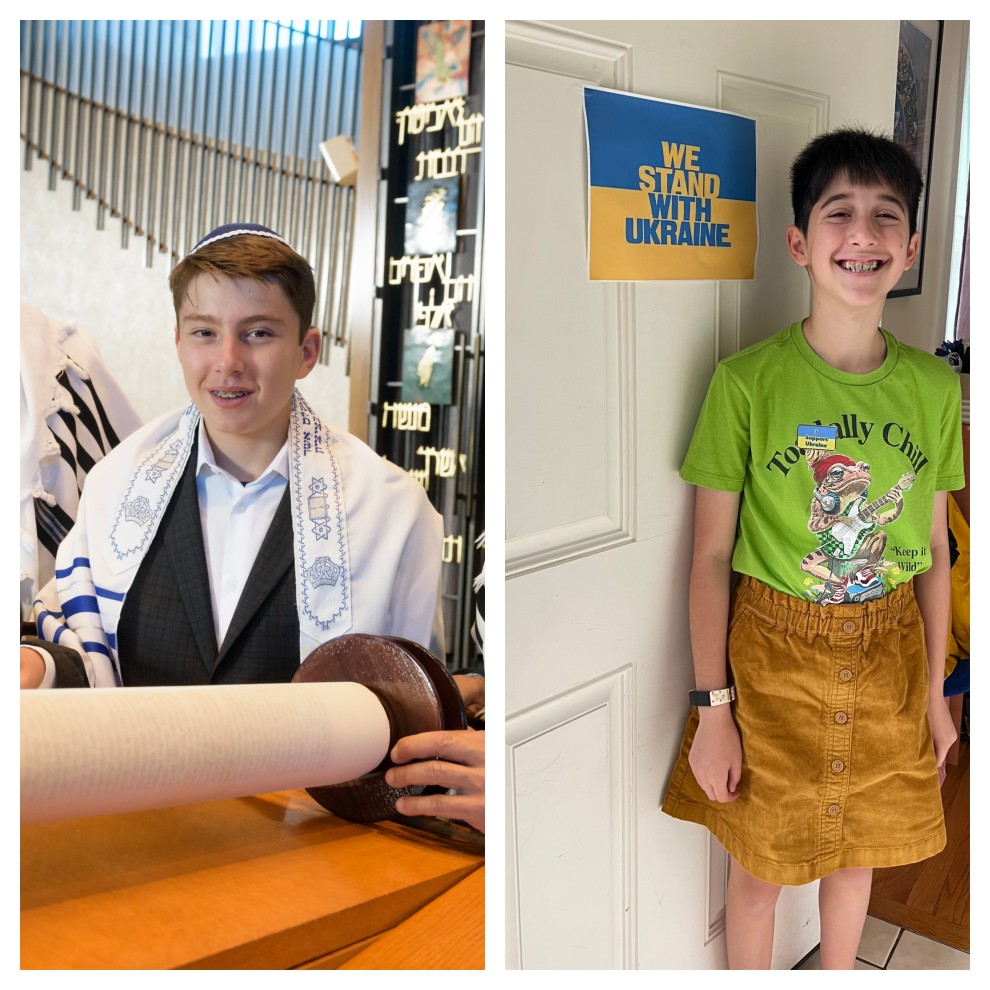 Since the early days of the Russian invasion of Ukraine, Jewish Federations of North America (JFNA) has provided support to those who have suffered displacement, loss, and trauma through the Ukraine Relief Fund. Together, Jewish Federations have raised more than $73 million to help the Jewish people and communities affected by this war. Throughout Greater Hartford, individuals and Jewish organizations have shown overwhelming support for the relief effort—including the young people in our community. The article below tells the story of several young people who, moved by the principle of tzedakah, have done what they can in support of those less fortunate than themselves.

Despite his young age of 13, Viktor Shekhman felt personally connected to the stories coming from Ukraine. In 1941, his grandparents escaped the massacre at Babi Yar, a Kyiv ravine where more than 33,000 Jews lost their life at the hands of Nazi invaders. Now, more than 80 years later and 4,500 miles away in his hometown of Farmington, Viktor wondered how he could support those affected by a new atrocity in Ukraine. He found the answer in his upcoming bar mitzvah.

As Viktor brainstormed for his bar mitzvah project, his family’s connection to Ukraine remained top of mind—and he wondered if he might be able to use the opportunity to help those affected by the war. “The discussions that we were having at home, about our family’s past and how it relates to the atrocities happening in Ukraine now, it all led Viktor to ask, ‘What could I do for my bar mitzvah project that would be meaningful?’” recalls Viktor’s mother, Eveline. Together, she and Viktor drafted an email calling on friends and family to use the occasion of his bar mitzvah to support the men, women, and children affected by the war in Ukraine.

“One of the most important things we learn is about repairing the world and [having] compassion for others,” wrote Viktor in his fundraising email. “My grandfather’s family [left Ukraine] after WWII and the Holocaust. But there is still a strong Jewish community that I would like to support and ask you to support by helping me fundraise with the help of the Jewish Federation of Greater Hartford.”

Viktor set a goal of raising $1,000 for Federation’s Ukraine Relief Fund — which he surpassed, raising more than $1,500 with the help of friends and family. “It made me happy to know that we were helping people,” said Viktor. “And it was pretty easy to do.”

This past spring, Illy and their sixth-grade classmates at Solomon Schechter Day School began fundraising in support of selected charities, as they do each year leading up to Purim. The school soon announced that all of this year’s donations would benefit the Ukrainian relief effort. Illy decided to put their love of art to work, making “I Support Ukraine” stickers to sell at the school craft fair.

“I’d learned a lot about what was happening in Ukraine from school, and it makes me upset to think about,” they said. “But I also learned how strong the Ukrainian people are—and I knew that I could do something to help.” Illy designed the stickers themself and recruited their dad, Ken, to help cut each one out. By Illy’s count, the “I Support Ukraine” stickers were their best sellers, with every dollar in support of Federation’s Ukraine Relief Fund.

What advice would Illy give to other young people wanting to make a difference? “Think about what you’re good at and go from there. If you like art, sell it on Etsy. If you like sports, organize a fundraiser at a game,” they said. “The important thing is that you do what you can.”

If you would like to join Viktor and Illy in supporting those affected by the war in Ukraine, click here to donate to Jewish Federation of Greater Hartford’s Ukraine Relief Fund.

Photo: Viktor Shekhman celebrates his bar mitzvah at Beth El Temple in West Hartford and Illy Sugarman wears one of their “I Support Ukraine” stickers.