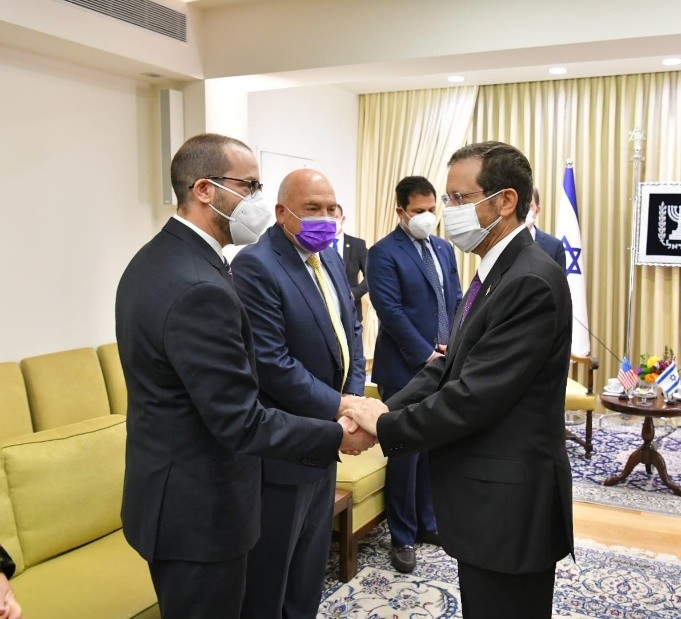 The Jewish Federation Association of Connecticut (JFACT) represents and advocates for the state's seven Jewish Federations, including the Jewish Federation of Greater Hartford. In doing so, JFACT provides a united voice in lobbying city, state, and federal officials on issues of importance to the Jewish community. In February 2022, JFACT had the honor of joining Governor Ned Lamont – the first sitting Connecticut Governor to visit Israel in 25 years – on a mission to deepen the business relationships shared between Connecticut and Israel. Below, JFACT Executive Director Michael Bloom shares a summary of the mission and the work done to strengthen relationships with Israel's business and political communities.

After more than two years of planning and pandemic interruptions, Connecticut Governor Ned Lamont took part in our state's first gubernatorial delegation to Israel in 25 years this past February. JFACT is proud to have played a significant role in the mission. Back in 2019, JFACT — along with Dan Weiner, vice president for global affairs of the University of Connecticut — pitched the idea of a business mission to Israel to Governor Lamont and David Lehman, commissioner of the Department of Economic and Community Development (DECD).

The governor was immediately supportive, and JFACT and Weiner began planning a business mission in coordination with Commissioner Lehman. Key members of the delegation included Michael Cantor, a member of our Federation Board of Directors and chair of Connecticut Innovations, as well as Radenka Maric, interim president of the University of Connecticut.

Since advocacy is also a part of JFACT’s mission, when we met with Israeli Prime Minister Naftali Bennett, Foreign Minister Yair Lapid, President Isaac Herzog, and the Ministry of Defense, we made sure to mention that our congressional delegation supports the $30 billion memorandum of understanding (MOU) between the United States and Israel, as well as funding for the Iron Dome. Back in 2016, the U.S. and Israeli governments signed their third 10-year MOU on military aid, covering fiscal years 2019 to 2028. Under the terms of the MOU, the United States pledged to provide — subject to congressional appropriation — a total of $38 billion in military aid to Israel. This includes $33 billion in Foreign Military Financing grants plus $5 billion in missile defense appropriations.

Having a sitting governor visit sites like the Western Wall and Yad Vashem and connect with Israel’s political leaders is a huge source of pride for the Jewish community in Connecticut — and an important building block in strengthening our economic and political connections to Israel. JFACT, the Jewish Federation of Greater Hartford, UConn, and other stakeholders are building on this success through the Connecticut-Israel Business Exchange, a new nonprofit entity in formation that will foster and strengthen trade, business, academic collaboration, and cultural exchange between Connecticut and Israel to the benefit of both. Look for a story on the Connecticut-Israel Business Exchange in an upcoming Federation Shabbat message.