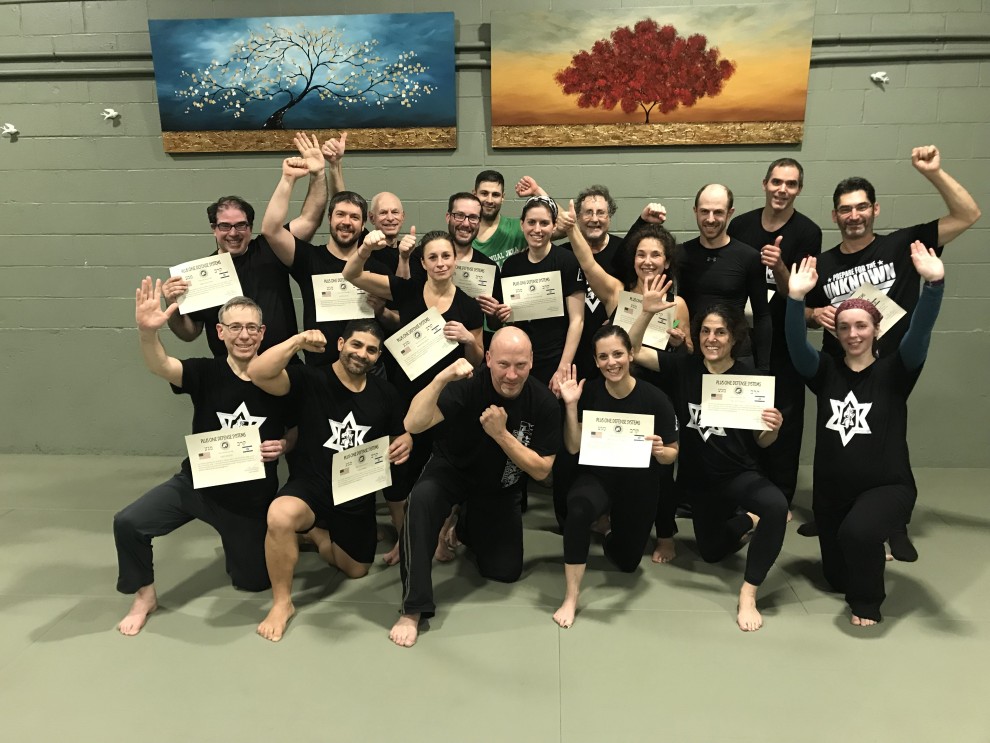 Legion is a nationwide nonprofit that trains Jews to defend themselves. Founded in New York City in 2014, the self-defense program has developed chapters across the country, including Greater Hartford. The nine-month program includes intensive martial-arts training, as well as classroom instruction on a variety of public-safety topics. Jewish Federation of Greater Hartford is pleased to support the Greater Hartford chapter of Legion in making our community stronger, more self-confident, and more connected to each other.

Steering his shopping cart down the aisle of the Crown Market, a kosher grocery store in West Hartford, Dan Gottfried spotted a familiar face and gave a wave. After greeting another friend just a few moments later, Dan couldn’t help but notice how secure he felt in this public space—a sad exception in today’s violent world. And then he realized why. Both of the friends he’d encountered that morning were fellow graduates of Legion, a self-defense program for Jewish people that Dan and his colleague, local community member Harry Weller, have been instrumental in bringing to Greater Hartford. Later that day, news broke of an antisemitic attack at a New Jersey deli, giving Dan a painful reminder of how important self-defense and situational awareness training is to today’s Jewish community.

The idea for a bringing this initiative to Greater Hartford has its roots in the Wexner Heritage Program, where Dan and fellow area resident Isaac “Yitz” Moss teamed up for a workshop and brainstorm session. As part of their Wexner experience, Dan and Yitz were tasked with developing a program they felt addressed a critical need in their community, using “out-of-the-box” thinking that is core to the Wexner program. “So much of Wexner was about not just accepting things as they are, but instead testing your reality in terms of what’s possible,” Dan explains.

The pair’s conversation soon turned to the increasing violence against the Jewish community and the physical powerlessness felt by many Jews. “We came up with this idea for martial-arts training that teaches confidence, self-discipline, and strength,” explains Dan. The idea stuck, and through Dan’s subsequent research, he discovered Legion, a New York-based program already focused on much of the work he and Yitz had discussed. He soon partnered with Harry Weller to bring a new chapter of Legion to the Greater Hartford area. In 2019, their local chapter graduated its first cohort of 25 students, which included Dan and Yitz.

Since its founding, nearly 60 people have graduated from the Greater Hartford chapter of Legion— including Yitz’s daughter, Aliya, who is one of the program’s youngest participants at 16 and the chapter’s first second-generation graduate. “I’ve done martial arts before, but this was a more mature environment,” says Aliya. “We were definitely all there for a purpose and not just for exercise.”

The nine-month program is not for the faint of heart, with twice-weekly martial arts classes and four half-day classroom sessions. According to Dan, the program’s intensity is entirely by design. “If you find yourself in circumstances where you need to act, you’re not going to have time to think about what to do next—you need to have these skills built into your muscle memory,” he explains. “Studies show you need to repeat a task two or three times a week over an extended period to achieve that. Over nine months, it’s really a rebirth.”

The program’s four classroom sessions cover a broad range of public-safety and self-defense topics, including active-shooter response, emergency first-aid, the law of self-defense, and situational awareness. Instructors have included the chief justice of the Connecticut Supreme Court and a Green Beret medic, bringing high-level expertise to each class. “One of my takeaways from our classwork was how to be aware of your surroundings,” recalls Aliya. “If I’m listening to music [in a public space], I also need to be able to hear what’s going on around me. I also learned to notice where all the exits are in an unfamiliar building.”

In addition to the self-defense skills they acquired through Legion, Aliya and her father both enjoyed the new friendships they forged, which is itself part of the program’s objective. “The idea was to represent the entire community,” says Yitz. “In my class, we had a Chabad rabbi and a non-Jewish participant who worked at the JCC. The barriers that might normally arise—like what synagogue you go to, or even whether you go to synagogue—they don’t exist here. Everyone is there for a common purpose.”

Remaining focused on the “common purpose” of empowering Jewish people in response to rising antisemitism also shapes Legion’s recruiting efforts. Although all are welcome to apply, the program is making a special effort to increase the number of young participants. “College campuses are increasingly antisemitic, so we want Jewish kids to have confidence in their Jewish identities, willingness to speak up for themselves, and security skills when they go off to school,” says Dan.

Thanks to funding from our Federation and the generosity of other donors in the Greater Hartford community, the program is offering a tuition grant for younger participants and those who work full-time at a Jewish organization. It also offers need-based financial assistance where appropriate. From young people headed to college to those working daily in the Jewish community, the overarching objective is to place well-trained, highly aware program graduates wherever antisemitism or violence could arise. “We don’t live in a very friendly world right now,” Yitz admits. “One way to combat that is by arming yourself with knowledge.”

Of course, the program isn’t entirely about anticipating the unspeakable. Anchored in Jewish values, it also aims to build self-confidence and connections to others. “It’s an opportunity to make a lot of friends, learn skills that could potentially save your life or that of a loved one, and have a lot of fun doing it,” says Dan.

Greater Hartford’s Legion chapter is now accepting applications for its upcoming cohort. If you or someone you know is interested in learning more or applying, visit the website here.