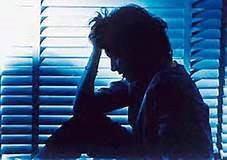 I had been in the family for several years before I learned about Aunt Fanny. It came up in passing one afternoon when Grandpa announced that he needed a ride somewhere. Of course I offered but was met with some resistance. After a series of questions, I finally heard the full story. Grandpa had a sister, Fanny, who was in a "facility" in eastern Long Island. In fact, Fanny was a patient at Pilgrim State Psychiatric Center, I place I knew well as a young mental health professional.

One Sunday afternoon that spring, Grandpa and I picked up some of Fanny's favorite foods - chicken soup with matzo balls, knishes, and other Jewish "soul foods" - and headed for Pilgrim Psychiatric Center. Fanny was a beautiful, gentle woman who, for unknown reasons, spent nearly 60 years as a psychiatric inpatient. She was a victim of the times, a victim of inadequate community based services and a victim of stigma and misunderstanding. For all intents and purposes, Fanny lived in the shadows.

Pilgrim was one of five hospitals that operated on Long Island. In the 1950s, nearly 50,000 people lived in these facilities: men and women of all ages, living in the shadows. Over the past 50 years, there has been a dramatic decline in hospital admissions but an unfortunate increase in the number of people struggling with mental illness. Some live successfully in the community; other, less fortunate souls are homeless or incarcerated.

May is Mental Health Awareness Month - a time for us to shine a positive light on the advances and growing opportunities for those living with mental illness. I spent nearly 35 years working with individuals, families and institutions engaged in mental health care and advocacy. I have seen amazing advances in the care and treatment of mental illness, and I have witnessed firsthand the power of recovery and the amazing ability of people to overcome the debilitating symptoms of mental illness and to live productive and happy lives.

With all the advances that have been made, one significant barrier still remains: stigma. Through our language, attitudes and policies, we often unwittingly demonize people with mental health issues, discouraging them from seeking help and undercutting their recovery.  How easily we use terms like "crazy," "insane" and "schizophrenic" without appreciating the negative impact they have on people who deserve our empathy, support and respect.

I have little doubt that, if Aunt Fanny had born 40 years later, she would have received the proper medication and support to live a fulfilling and productive life outside the cold walls of Pilgrim State Psychiatric Center. Fortunately for our community, we are blessed with Jewish Family Services - a quality mental health care provider that offers trusted care and guidance to both individuals and families, helping them achieve their highest degree of recovery.

According to the National Institute of Mental Health, nearly one in five American adults suffers from some form of mental health concern. Mental illness touches us all in one way or another. It is not something to be feared, nor does it define a person's character. It is simply one of many obstacles in life to be overcome.

Tolerance, inclusivity and respect are key Jewish values - and this month in particular, we have an opportunity to reaffirm them. Let's commit, as a community, to stamp out stigma and to advocate for those who are living with mental illness.