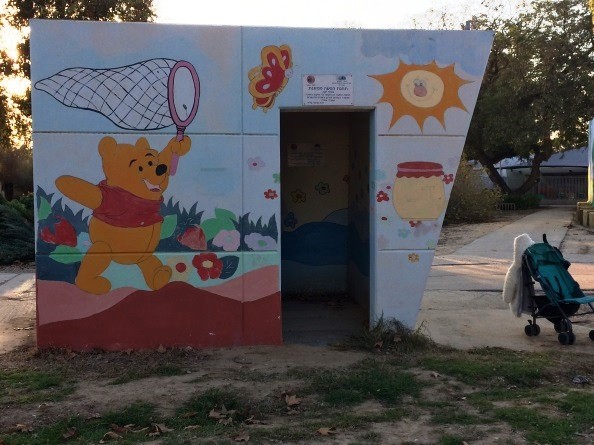 What is that building? Last Sunday, along with 19 other men who participated in our Federation's Second Annual Men's Mission to Israel, I visited Kibbutz Nahal Oz on the Gaza-Israel border. We were moved by the sight of people tending to their gardens and children running and playing. We were invited into the structure shown above to be entertained by a young boy - only to learn that it's one of several bomb shelters critical for the survival of this community, which experienced a daily barrage of rocket attacks during the recent war with Gaza.

We read this week in parashat Va-Eira how Pharaoh responded to Moses' plea to "let my people go." As we know from the story of Passover, it took ten plagues to finally convince Pharaoh to release the Israelites from slavery. With each plague, the suffering of the people increases. Even when Moses offers the option of relief, G-d "hardens Pharaoh's heart" so that he remains stubborn and uncaring, refusing to give in to the slightest sense of empathy or compassion. But why?

Our sages tell us that Pharaoh was so evil that he required greater demonstrations of G-d's power before he could appreciate the consequences of his actions. The Midrash tells us: "This is the way of the wicked: when they are in trouble, they affect humility; but as soon as they have respite, they return to their perversity" (Sh'mot Rabbah 10:6).

Unfortunately, Pharaoh is not the only leader who suffers from this syndrome. There are so many examples of how we allow our hearts to harden and ignore the consequences of our actions. While some situations can be easily improved with civil conversation and honest debate, others require a greater effort that brings home the true impact and consequences of strongly held beliefs, positions and opinions that can cloud our judgment.

The bomb shelter we visited is an extreme example of what can happen when hearts are hardened: disruption, death and destruction.

Last Friday night, we gathered in Jerusalem to welcome Shabbat. Harvey Pava led us in a moving, inspiring and spirited service. We were praying at the Western Wall, a holy place for Jews which, before 1967, was off-limits for hundreds of years because the hearts of the powerful were hardened. Yet we opened our hearts and prayed that Shabbat peace would prevail over the entire world. Each of us in our own way committed to embrace our core Jewish values and make the world a more peaceful, tolerant and compassionate place for all people.

Like Moses, we too need to stand up for those who are suffering and be strong enough to challenge those whose hearts are hardened. This Shabbat, let us come together as a community and dedicate ourselves to softening those "hearts of stone" and bringing more compassion, respect and love to each other and the entire world.