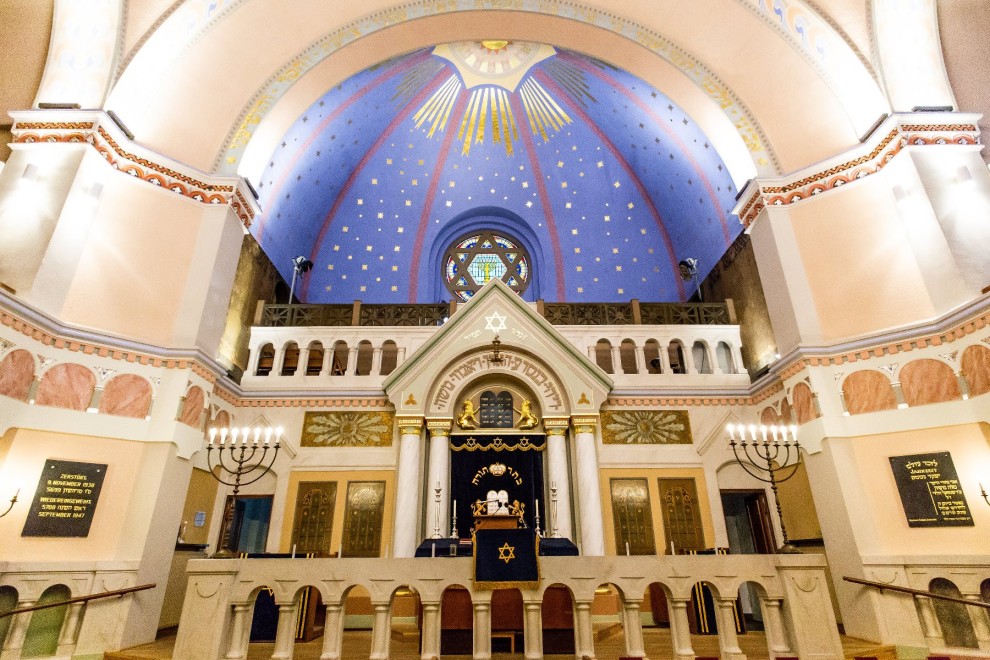 Friends, our Federation's Vice President of Development, Rachel Berezin, recently returned from a Jewish Federations of North America mission to Berlin and Budapest. This week I've asked her to share one of her most meaningful moments from the trip with you. I hope you find it as moving as I did. Shabbat Shalom. - Howard

On Friday, July 13, I landed in Berlin, Germany, with Laurie Mandell, our Campaign Chair, and over 100 Federation professionals and lay leaders from across the country. We were participating in JFNA's Financial Resource Development Mission to Berlin and Budapest.

I felt uncertain and uneasy about traveling to Berlin. Many of my fellow mission participants shared these feelings. Some were the first generation in their family to go to Berlin since the Holocaust. Some had been asked by their families never to set foot in Germany. We got to know each other discussing how strange and uncomfortable we felt as Jewish people in Germany.

On Friday night, we went to the Pestalozzistrasse Synagogue, one of the only surviving synagogues from pre-war Berlin. A plaque on the wall informed us that the synagogue was closed after Kristallnacht, November 9, 1938, when it suffered major damage. Renovations to the building began immediately after the war, and it reopened for Rosh Hashanah in September 1947. Can you imagine the will and strength of the Jews of Berlin to start repairs immediately after such incomprehensible tragedy?

Pestalozzistrasse is a liberal synagogue. Most of the prayers are sung and there is an organ that plays. Men and women sit separately: men downstairs in the middle rows and women on the right and left sides and in the balcony.  I sat in the balcony so I could take in the ambiance.

When the Shabbat services began, I was overcome with intense emotion.  Here I am, I thought - a Jewish woman, mother and Jewish communal professional - sitting in a synagogue that Hitler and the Nazis wanted to destroy. Here I am, with over 100 other Jewish people representing Jewish communities across North America, making Shabbat services with the Jewish community of Berlin. Here we are, together, singing the Shabbat prayers that our ancestors sang for thousands of years and that Hitler wanted to silence.

Toward the end of services, a family went up to the bimah. They would celebrate the Bar Mitzvah of their oldest son the next day, they were holding a baby, and they had another son with Down syndrome. There they were: a family amongst a community that exemplified the future of Judaism in Berlin - a future that six million only dreamed about.

I thought about my family's journey to achieve religious freedom and about the hundreds of family stories among us - stories that, wondrously, had brought us all together for Shabbat in Berlin. I thought of my great-grandmother, for whom I'm named, who escaped Russia during the pogroms and hid in corn fields with her siblings so that they could one day make a better life in America. I thought about my grandfather, of blessed memory, whose home held our Jewish holidays and the memories that shaped my childhood. I thought about my own daughters, who love to sing songs in Hebrew and are proud to share their Jewish learning with everyone.

These are exciting times. We are living the lives that our ancestors only dreamed of. Together, we have the freedom and power to decide what the Jewish future will look like.

Theodor Herzl said, "If you will it, it is no dream." How big is your will, and how large are your dreams? Let's dream big! I would love to meet with you and learn about your dreams for our Jewish community.