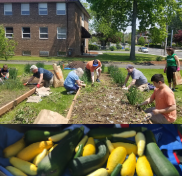 Last week I was invited by Rabbi Randall Konigsburg to attend the Manchester Interfaith Thanksgiving Service at Congregation Beth Sholom B'nai Israel. A project of the Manchester Clergy Council, the annual service brings together leaders and congregants from virtually every faith community to express what we Jews would describe as hakarat hatov, or praise for the good - acknowledging our blessings and supporting those less fortunate.

Fostering strong interfaith relationships is an important part of the work of Federation's Jewish Community Relations Council (JCRC).  Interfaith understanding and collaboration is driven by our values and by our core needs as a community.

I am reminded of a story I once heard from Rabbi Michael Melchior, a former Chief Rabbi of Norway, Member of Knesset and Israeli government minister. Rabbi Melchior described how, in the 1920s, his grandfather Marcus Melchior visited virtually every church across Denmark to educate his fellow countrymen about Jews and Judaism. Rabbi Melchior attributes Denmark's exemplary efforts to save its Jewish population during World War II in large measure to the interfaith activities of his grandfather.

JCRC's interfaith work takes many forms and bears abundant fruit. An apt example is the Jessie's Community Gardens initiative. Created by Dane and Michele Kostin in memory of their daughter, Jessie's Community Gardens bring together people of all faiths across Greater Hartford and beyond to provide fresh food to those in need and in the process build friendships, understanding and collaboration.

There are now 14 Jessie's Community Gardens on the grounds of synagogues, churches, nonprofits, parks and schools in East Hartford, Hartford, Manchester and West Hartford - as well as one in Cheshire and one as far afield as San Francisco. They bear important fruit both literally and figuratively. More than a ton of fresh produce from the gardens is distributed each year to hungry people through local food pantries, and significant relationships have developed. For example, Beth David Synagogue and St. Thomas the Apostle Church in West Hartford established a garden together in 2014, and since then Rabbi Yitzchok Adler and the Reverend Edward Moran have met for text study, held public interfaith dialogues, and worshiped together in solidarity after last year's synagogue shooting in Pittsburgh.

In this time between Thanksgiving and Hanukkah, we give thanks for life's blessings and seek ways to spread light. Cultivating strong interfaith relationships allows meaningful opportunities for both.

Photo caption: Top: members of Beth David Synagogue and St. Thomas the Apostle Church tend their Jessie's Community Garden in June 2019. Bottom: A portion of their August 2019 harvest, which was donated to a food pantry.