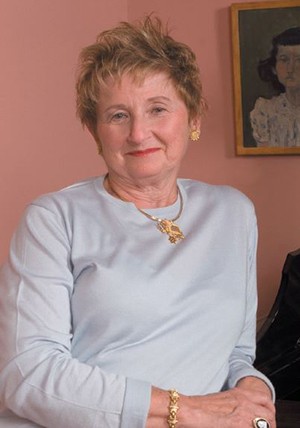 Judy Zachs of Bloomfield, Conn., and Boca Raton, Fla., will be honored for her philanthropy and volunteerism on two separate occasions in September. Jewish Federations of North America has selected her to receive the prestigious 2016 Kipnis-Wilson/Friedland Award.

The Kipnis-Wilson/Friedland Award was created in 2004 to recognize outstanding female philanthropists such its namesakes, Norma Kipnis-Wilson and Toby Friedland (z”l), who created the Lion of Judah program in Miami, Fla., in 1972. They wanted to recognize women who contribute $5,000 or more annually to their Federation in their own name. At that time, $5,000 was the cost of resettling a family of four from the Former Soviet Union to Israel; in today’s dollars, this would be equivalent to $27,500.

Today, there are more than 17,000 Lions of Judah worldwide. In Greater Hartford, there are 135 women who give to the Women’s Philanthropy campaign at the level of $5,000 or more. Together, these local Lions of Judah contribute more than $1 million to the community each year.

Judy Zachs will be honored in Hartford on September 8 at the Jewish Federation of Greater Hartford’s Lion of Judah Annual Celebration dinner. She will also be recognized at the International Lion of Judah Conference in Washington, D.C., from September 11 through September 13.

Ms. Zachs is a philanthropist extraordinaire. As a seasoned social work clinician and women’s group leader, she knows firsthand the power of women’s connections and the impact that women have on their community. Ms. Zachs became a Lion of Judah in 1995 and soon after endowed her Annual Campaign gift to ensure her support of the Jewish Federation of Greater Hartford Annual Campaign in perpetuity. “Philanthropy motivates me and has always been a part of my family life,” she noted.

"Judy is an enthusiastic supporter of our Women’s Philanthropy program and has served in many capacities over the years,” said Carolyn Gitlin, Vice Chair of Women’s Philanthropy for Jewish Federation of Greater Hartford. “She is among a select group of Jewish women who have played and are playing key roles as creative, committed leaders."

Jewish Federation of Greater Hartford’s 2017 Lion of Judah Annual Celebration will be a dinner held on Thursday, September 8, at a private home. Keynote speaker Sandi-Jo Gordon will discuss the Holocaust through artists’ eyes. She will explore how Jewish women artists, including daughters of survivors, have chronicled the Shoah by visualizing the personal testimonies of victims and survivors. A retired interior designer, Ms. Gordon now offers art lectures and tours for the nonprofit sector. Event committee members are Ellen Blumberg, Toby Cohn, Elaine Leshem, Jessica Zachs, Paige Zachs and Zoë Zachs.

The International Lion of Judah Conference (ILOJC) will be held in Washington, D.C., from Sunday, September 11 to Tuesday, September 13. The conference is held every two years and brings Lions of Judah together from around the world for three phenomenal days of learning, sharing and celebration. This year’s program headliners include Madeline Albright, the first female Secretary of State, and Tom Ridge, first Secretary of the U.S. Department of Homeland Security. Judy Zachs will be honored at the conference as Jewish Federation of Greater Hartford’s Kipnis-Wilson/Friedland Award recipient. Beth Papermaster is serving as local recruitment chair for the conference.

To learn more about the Lion of Judah program, please contact Marta Goldman at 860-727-6125 or mgoldman@jewishhartford.org.